The blood brain barrier (BBB) is a highly specialized membrane lining cerebral microvessels, which regulates the entry of plasma components, red blood cells and leukocytes into the central nervous system (CNS), and ensures the export of potentially neurotoxic molecules from the brain to the blood. Making it simple: it is an interface (a border) between the brain and the blood stream. The BBB ensures a highly stable internal environment of the brain and prevents foreingn microorganisms and toxins from invading the brain tissue.

There are two further sites in the central nervous system that form a barrier between the blood and cerebrospinal fluid (CSF): the arachnoid epithelium forming the middle layer of the meninges, and the choroid plexus epithelium. The BBB has, however, the most important role in maintaining brain function among the tree of them.

The lining of the blood vessels (arteries and veins) is called endothelium and is formed by endothelial cells. The endothelium regulates the physical (protection against injuries) and functional (transport of substances) integrity of the vessels, and is, thus, the main structure of the BBB. The endothelial BBB has tightly sealed cell-to-cell contacts, so called tight junctions, and is sheathed by mural cells (pericytes in capillaries and vascular smooth muscle cells in arterioles and arteries) and by astrocyte endfeet.

The specialized structure of BBBs support its three essential functions:

When BBB loses the ability to perform its usual blocking and selectivity functions, it is said to be dysfunctional. In this situation, the direction of the flow is changed: the permeability to forein elements from the blood to the brain is increased and the excretion of toxic substances from the brain to the blood decreases.

What can cause BBB dysfunction? Many factors can increase BBB permeability and, in some cases, initiate a pathological cascate that will lead to dysfunction, including:

In Alzheimer’s disease, a BBB breakdown (especially around the hippocampus) is the very first vascular dysregulation noted – it can be documented by neuroimaging studies years before the symptoms of dementia or even the pathological signs appear.

The damage to BBB leads to different physiopathological changes that will contribute to the development of Alzheimer’s disease:

As we can notice, disturbing BBB homeostasis not only causes neuronal damage, but also compromises Aβ clearance at the neurovascular unit, therefore likely resulting in a vicious cycle between Aβ accumulation and BBB dysfunction during AD progression. 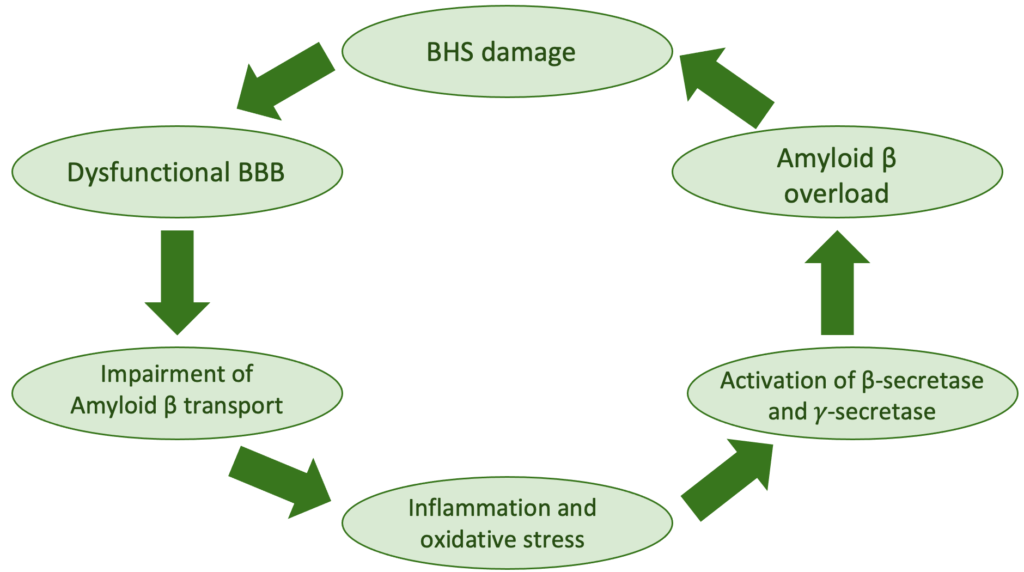 The knowledge about the mechanisms of BBB injury and its involvement in Alzheimer’s disease has been widely clarified and documented in recent years. However, further studies must confirm these findings and help to develop therapeutic and/or preventive measures to reduce early breakage of the brain protection barrier.

Of all the factors that can cause the blood-brain barrier to break down, the alteration of intestinal permeability is given greater consideration because it is a modifiable factor dependent on lifestyle measures. Diet composition and gut microbiota play a crucial role in maintaining intestinal integrity and the intestinal-brain axis.

Given the ability for Aβ to induce permeability of the BBB, it is reasonable to hypothesize that a similar effect may occur from secretion of bacterial amyloids (yes! bacteria can also produce Aβ!) . In fact, the concept of microbes and/or microbial factors inducing alteration of the BBB is not new. Some bacteria are capable of directly traversing the BBB, giving rise to brain infection and/or abscess, while others do so via stimulation of an inflammatory response. Specifically, LPS (Lipopolissacaride) is an endotoxin and pro-inflammatory agent produced by gram-negative bacteria that can potently stimulate BBB disruption in infectious states happening outside of the brain. On the other hand, short-chain fatty acids (SCAFAs) produced by commensal bacteria can protect the BBB from damage.

Maintaining BBB integrity is crucial for tight control of the chemical composition of brain interstitial fluid (brain environment), which is critical to proper neuronal function. Breakdown of the BBB enables toxic blood ­derived molecules, cells and microbial agents to enter the brain and is associated with inflammatory and immune responses, as well as Amyloid ß overload. It can initiate the multiple pathways of neurodegeneration leading to the pathological feature and symptoms of Alzheimer’s disease.