Resveratrol (trans-3,5,4′-trihydroxystilbene) is a polyphenolic compound found in plants and thus, also in plant foods such as grapes, raspberries, mulberries, plums and peanuts. Within the framework of a screening program of the National Cancer Institute, a total of 72 plant species containing resveratrol (RSV) were identified from several thousand. The highest concentration of RSV has been determined, so far, in the root of Japanese knotweed (Polygonium cuspidatum), which has been used therapeutically in traditional Chinese medicine for hundreds of years to treat inflammation.

In this country, however, grapes are the most significant RSV supplier for humans. Particularly large amounts of RSV are found in the skin of red grapes, so that significant concentrations of RSV can also be found in red grape juice, and especially in red wine. In addition, during maceration, a lot of RSV is extracted from the skins by the emerging alcohol. Red wine contains an average of 1-2 mg RSV per liter. However, the values vary significantly and depend on the grape type and the growing area. Compared to all other grape varieties examined, Pinot Noir contained the highest average concentrations of 3.6 mg per liter. French wines with more than 5 mg RSV per liter were at the top. Other factors such as temperature, pH value and sulphurisation during wine production can also have a significant influence on RSV levels. RSV also occurs in white grapes, but on average they contain only 1 to 5 % of the quantity compared to red grapes. As a result, rosé wine and white wine contain less RSV (1).

Functionally, RSV is used by plants as phytoalexin. This means those metabolic products that protect the plant against fungal attack (e.g. Downy mildew, Botryris) or against other stress factors such as UV light. Such substances are also called secondary plant substances in technical terminology. Two different forms of RSV are generated, differing in molecular symmetry, and are therefore called cis- and trans-RSV. They have similar physiological effects, but since research is mainly concerned with the trans form, ‘RSV’ is used synonymously for ‘trans-RSV’ in the following.

The secondary plant substance RSV develops numerous biological and pharmacological protective effects and was already known in the mid-nineties in connection with the ‘French Paradox’. This is the result of the observation that French people, despite their unhealthier lifestyle, live longer than Germans and Americans because of their higher alcohol consumption, and that the frequency of heart attacks in France is 3 times lower than in the USA. Over the following years, RSV became the focus of research and showed anti-inflammatory, antioxidant, cancer-inhibiting, heart protecting and life-prolonging properties in numerous test models, both in vitro and in vivo, and was regarded as a new miracle cure.

First indications that RSV could also be responsible for the protective effect of red wine in Alzheimer patients were shown by epidemiological studies of a French research group in 1997, which showed for the first time an inverse correlation between moderate wine consumption and the occurrence of Alzheimer’s disease: in the group of moderate wine drinkers (250-500 ml per day) the risk of dementia was reduced by a factor of 5 (2).

This aroused the interest of dementia research in RSV. In recent studies, RSV showed several neuroprotective effects in the animal model: it reduced the death of neurons and cognitive decline in mice suffering from Alzheimer’s disease, improved memory performance and was able to alleviate cerebral damage following previous brain infarctions and traumatic effects (3,4). 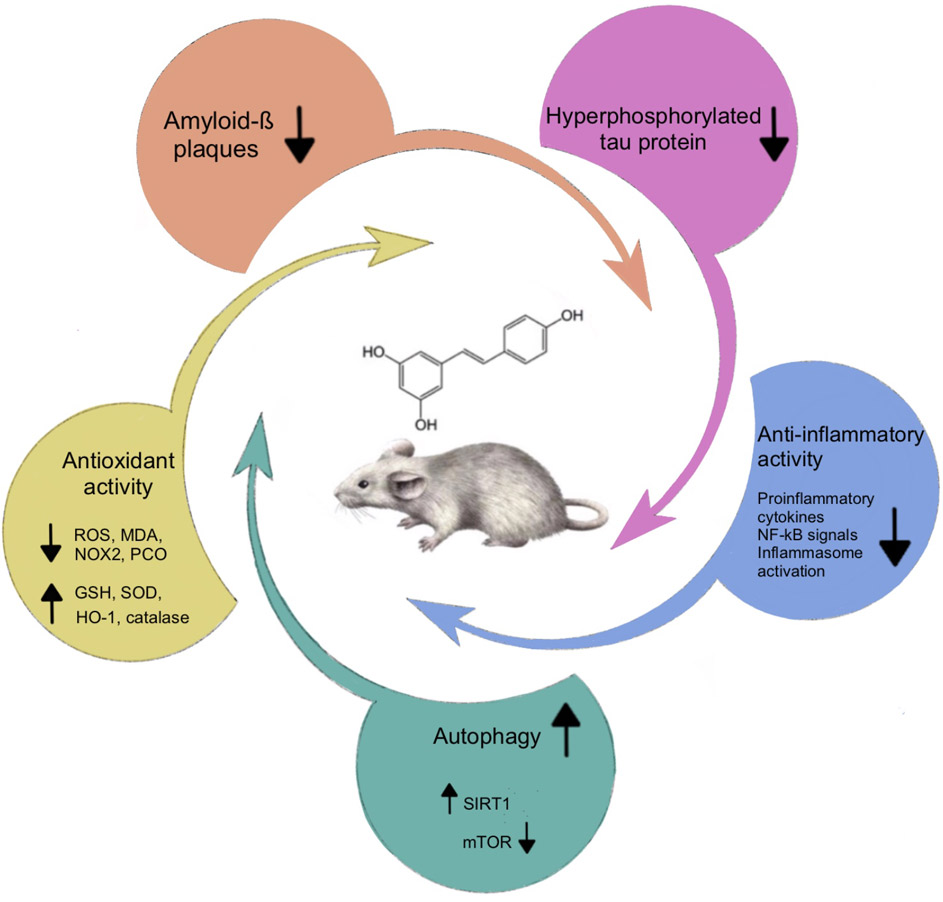 Based on these convincing results, the therapeutic potential of RSV in Alzheimer’s patients is currently being tested in clinical trials. Two recent pilot studies have shown that RSV can easily cross the blood-brain barrier in humans and penetrate brain tissue, as it was detectable in cerebrospinal fluid. RSV was well tolerated by all volunteers and remained free of side effects up to a dose of 5 grams per day. Both double-blind studies show evidence of positive effects of RSV in humans: in the RSV-treated group, Alzheimer’s biomarkers such as ß-amyloid were reduced (6) and four clinical parameters indicated a lower worsening of the condition in the RSV-treated patient group (7). However, the results were not statistically significant due to too few subjects. We must wait for larger studies to confirm these promising findings. However, RSV is already part of the multifactorial approach of the American neurologist Dale Bredesen, who, with his therapy known as ‘ReCode’ (Reversal of Cognitive Decline), has managed to clinically reverse Alzheimer’s courses in the early stages (8).

Conclusion:
The secondary plant substance resveratrol, which occurs naturally in red grapes, their juice and red wine, seems to be responsible for protective effects in the development of dementia through multiple mechanisms of action and could therefore be a promising therapeutic approach in the fight against Alzheimer’s disease.