The polyamine spermidine and its neuroprotective effect in Alzheimer’s disease

Spermidine, also known chemically as N-(3-aminopropyl)butane-1,4-diamine, is one of the naturally occurring polyamines. The name spermidine is historically derived from male seminal fluid, from which the biosynthetic derivative spermine was isolated as early as 1870.

Spermidine occurs as a natural substance in amino acid metabolism in all living organisms and of all body cells. The polyamine enters the human body either externally through the intake of spermidine-containing foods (see Table 1), or it is formed by the body’s own cellular biosynthesis, starting from the amino acid arginine (Figure 1). However, it can also be formed by our microbiota, that is, our intestinal bacteria. It is possible to detect spermidine in blood plasma in humans. Only recently, it was demonstrated in mice that spermidine from food actually reaches the brain, thus passing the blood-brain barrier[1].

Figure 1: Biosynthesis of spermidine: Spermidine is part of the physiological polyamine system in the human body. The starting material is the amino acid arginine, which is converted to putrescine via ornithine. Spermindine is formed during the formation of spermine from putrescine, or during the degradation of spermine (simplified after [2]).

Table 1: Amount of spermidine in food (according to [3])

Spermidine is also found in a variety of plant and animal foods. Wheat germ is a particularly rich source, but hard cheese, dried soybeans and some other foods also provide good amounts of spermidine (see Table 1).

Functions of spermidine in the human body

Spermidine became known as a so-called “caloric restriction mimetic”. This means that it is able to mimic cellular processes of caloric restriction, i.e. fasting. One important cellular process activated during fasting is known as autophagy (translated from Greek as “eating oneself”). This process describes a molecular clean-up and recycling program that is turned on in times of food shortage to overcome energy crises. In this process, cellular material is broken down into recyclable molecules. This also disposes of cellular garbage dumps (such as misfolded proteins or damaged cell organelles), which could lead to neurodegeneration and other (cellular) dysfunctions in old age.

Functionally, spermidine is closely associated with cell growth and is involved in the production of nucleic acids and proteins or in membrane stabilization in growing cells. It is therefore not surprising that spermidine levels are increased during growth processes, during pregnancy, during the repair of muscle cells (after strong athletic exertion and regeneration) as well as after blood loss or blood depletion or after prolonged stays at high altitudes, but also that the concentration of endogenous spermidine decreases with aging.

Today, it is known that elevated concentrations of spermidine can have beneficial effects on cardiovascular and tumor-related diseases and, in principle, on all chronic inflammatory diseases (e.g., rheumatism, hepatitis, colitis, psoriasis) because of its significant contribution to cell homeostasis, cell growth and proliferation, tissue regeneration, and antioxidant activity[4]. Figure 2 illustrates all the beneficial effects of spermidine on physiological processes known to date and also its modulating effects on pathological processes. 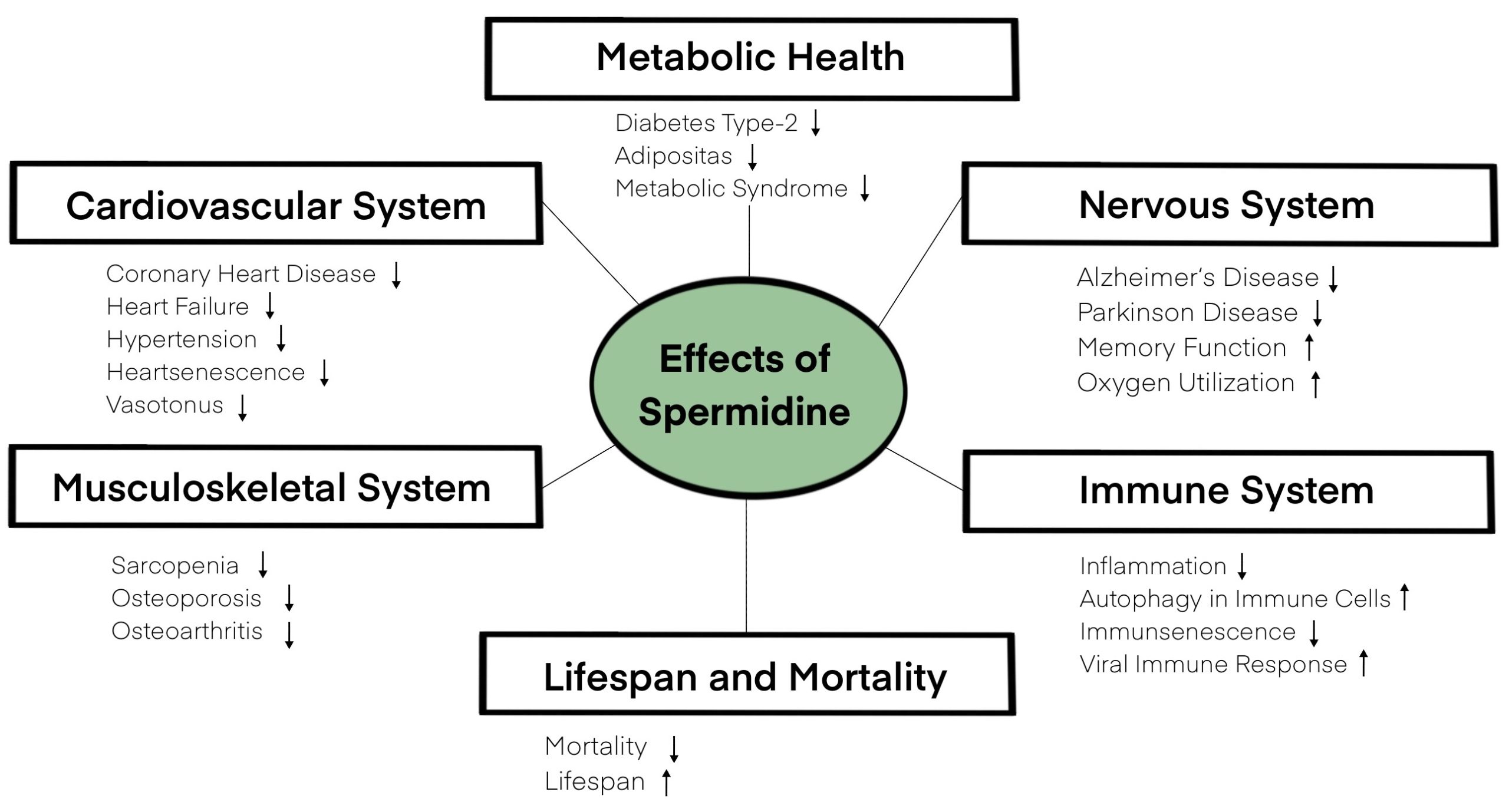 Based on these well-documented age-protective and autophagy-promoting properties of spermidine, possible neuroprotection has become the focus of spermidine research in recent years.

In 2013, for example, a pioneering study showed that age-related memory loss in fruit flies, similar to that in humans, can be attenuated by feeding them spermidine. In science, fruit flies (lat. Drosophila) are a quite meaningful and, above all, simple experimental model to study aging processes, dementia and basic brain processes. This is quite astonishing for an organism that lives only one month and whose brain consists of “only” 250,000 nerve cells. But aging proceeds faster in the short-lived Drosophila and the comparatively simply constructed brain is much easier to study[6].

These beneficial effects of spermidine have also been confirmed in rodent models:

In addition to the now very solid preclinical evidence in various animal models for spermidine as a neuroprotective molecule, more and more human studies are being conducted.

In 2018, a group of researchers at the Charite Hospital in Berlin, Germany, investigated in a pilot study in humans, the so-called PreSmartAge study, whether spermidine could exert a positive influence on memory performance in patients with mild cognitive impairment [9]. For this purpose, 30 participants between 60 and 80 years of age who suffered from self-assessed but not yet clinically manifested loss of memory function were recruited for a randomized double-blind study. Subjects performed better than the placebo group on a cognitive performance test after taking 750 mg of a spermidine-rich plant extract containing 1.2 mg of spermidine for 3 months. Thus, dietary spermidine intake had a positive effect on memory performance in older adults with incipient cognitive decline. This positive effect, the researchers concluded, could be mediated by stimulation of neuromodulatory actions in the memory system [9].

Due to the promising results, a larger and longer study by the same research group is currently taking place: this so-called SmartAge study, a randomized 12-month clinical trial in which 100 patients with incipient cognitive decline were recruited, is intended to help validate the therapeutic potential of spermidine supplementation and to describe possible neurophysiological mechanisms of action [10]. However, the results of this study have not yet been published – we will keep you updated!

In parallel with the SmartAge study, a cross-sectional study was recently conducted to investigate the relationship between spermidine intake and structural brain measures. For this purpose, 108 patients with subjectively perceived cognitive impairment and 51 healthy subjects were prescribed a Mediterranean diet, and spermidine intake in this diet was calculated and documented. The result was that spermidine intake correlated positively with greater cerebral cortex thickness (cortical thickness) in brain regions at risk for Alzheimer’s disease. Also, spermidine intake was related to a greater volume of the hippocampus, the part of the brain functionally involved primarily in the formation and maintenance of memory content and in learning processes. The authors concluded that in the Mediterranean diet, spermidine may be a critical component for brain health [11].

The dementia-protective potential of spermidine was also recently confirmed in a three-month multicenter intervention study in Austria[12]. The researchers were able to show that spermidine levels not only decrease with age, but are also significantly lower in Alzheimer’s and MCI patients [12][13]. As a logical consequence, a low level in the blood would then be followed by oral supplementation with spermidine. This was done in the Austrian study, showing that increasing spermidine plasma levels in patients with mild cognitive impairment led to an improvement in memory performance as early as within 3 months.

Based on current knowledge, researchers believe that the physiological polyamine system (see Figure 1) plays an important protective role in the body. Moreover, it is hoped that the measurement of spermidine as a possible biomarker candidate could also be used in the future to predict Alzheimer’s disease even before the functional deficits occur.

Look at the video “Alzheimer’s: Eating against forgetting ORF treffpunkt Medizin” in our media library (video in German).

Based on these clear scientific data, the naturally occurring polyamine spermidine is now considered a promising substance with the potential to reduce the risk of dementia. A logical consequence of these studies is to take spermidine orally if laboratory detection has shown an insufficient concentration in the blood. This is already being successfully implemented in nursing homes in Austria.

Furthermore, it is hoped that in the future, measurement of spermidine in the blood could potentially be used to predict Alzheimer’s disease before the functional deficits occur.

You can also use this knowledge directly for yourself: Put spermidine-rich foods on your menu every day, such as wheat germ: a heaping tablespoon already contains 1-2 mg of the protective polyamine! In this way, you too can benefit directly from the brain-protecting properties of the polyamine and remain mentally wide awake for a long time!