Monoclonal antibodies as a pharmacological therapy

The situation is escalating: While the number of Alzheimer’s patients in Germany and worldwide is increasing dramatically, a pharmacological breakthrough still seems to be far away. In recent years, a series of promising antibody preparations have been developed that have made it to the final stage of clinical approval. However, almost all of them have failed so far due to insufficient efficacy – and not a single one has succeeded in stopping mental decline.

Target of Alzheimer’s antibodies and principle of action

According to the amyloid hypothesis, amyloid-beta protein (Aβ), a major component of extracellular deposits (plaques) in the brain, is the trigger of the Alzheimer’s disease process and therefore an attractive target for pharmacological intervention. Aβ occurs in various forms that differ in size and solubility, and thus in the neurotoxicity (toxic effect in the nervous tissue).

Several years ago, anti-Alzheimer’s agents called Solanezumab (Eli Lilly) and Bapineuzumab (Janssen and Pfizer) already failed due to a lack of clinical efficacy signals. In 2022, Crenezumab and Gantenerumab, two candidates from Swiss pharmaceutical company Roche, also failed to show effectiveness against the fatal brain disease and thus also dropped out of the clinical approval process.

Even the most promising drug candidate to date, Aducanumab (Biogen/Eisai), which made it to approval in 2021, albeit in a highly controversial approval process and only in the U.S., has questionable efficacy. In Europe, its approval was rejected by the European Medicines Agency (EMA) due to “an unproven efficacy and possible serious side effects of the drug.” Approved in the U.S., aducanumab is the first new Alzheimer’s drug since 2003, and its slowing effect on cognitive decline has been reported at 22%, but with life-threatening side effects such as brain swelling and hemorrhage in more than 30% of study participants, and also extremely high therapy costs. The patient benefit is therefore questionable. Read more about the approval fiasco concerning Aducanumab here.

Recently, the results of the Clarity-AD study with Lecanemab were published in a press release from the manufacturer Biogen: Lecanemab slowed mental decline by 27% in patients, and a rapid marketing approval is being targeted by the manufacturers Biogen and Eisai. To read about how this study should be evaluated, please click here.

The result of the Trailblazer-ALZ2 study with Donanemab is expected in 2025.

Efficacy of monoclonal antibodies compared to the ReCode concept according to Dr. Bredesen

The study data of the monoclonal antibody therapies are particularly disappointing in comparison with the clinical pilot study of the ReCode concept according to Dr. Dale Bredesen, which was published in 2021 (see figure). Here it becomes clear that the monoclonal antibodies are only able to slow the deterioration of cognitive decline somewhat, but cannot stop or cure it, and with a huge risk of fatal side effects. Dr. Bredesen’s individualized ReCode therapy, unlike monotherapies with the antibody drugs, detects and targets 36 potential risk factors causally associated with Alzheimer’s disease. As the figure shows, the ReCode pilot study has demonstrated in a direct comparison of efficacy that it is entirely possible to stop and even reverse the progression of Alzheimer’s disease, particularly in its early stages, through a multifactorial, lifestyle-oriented treatment approach. 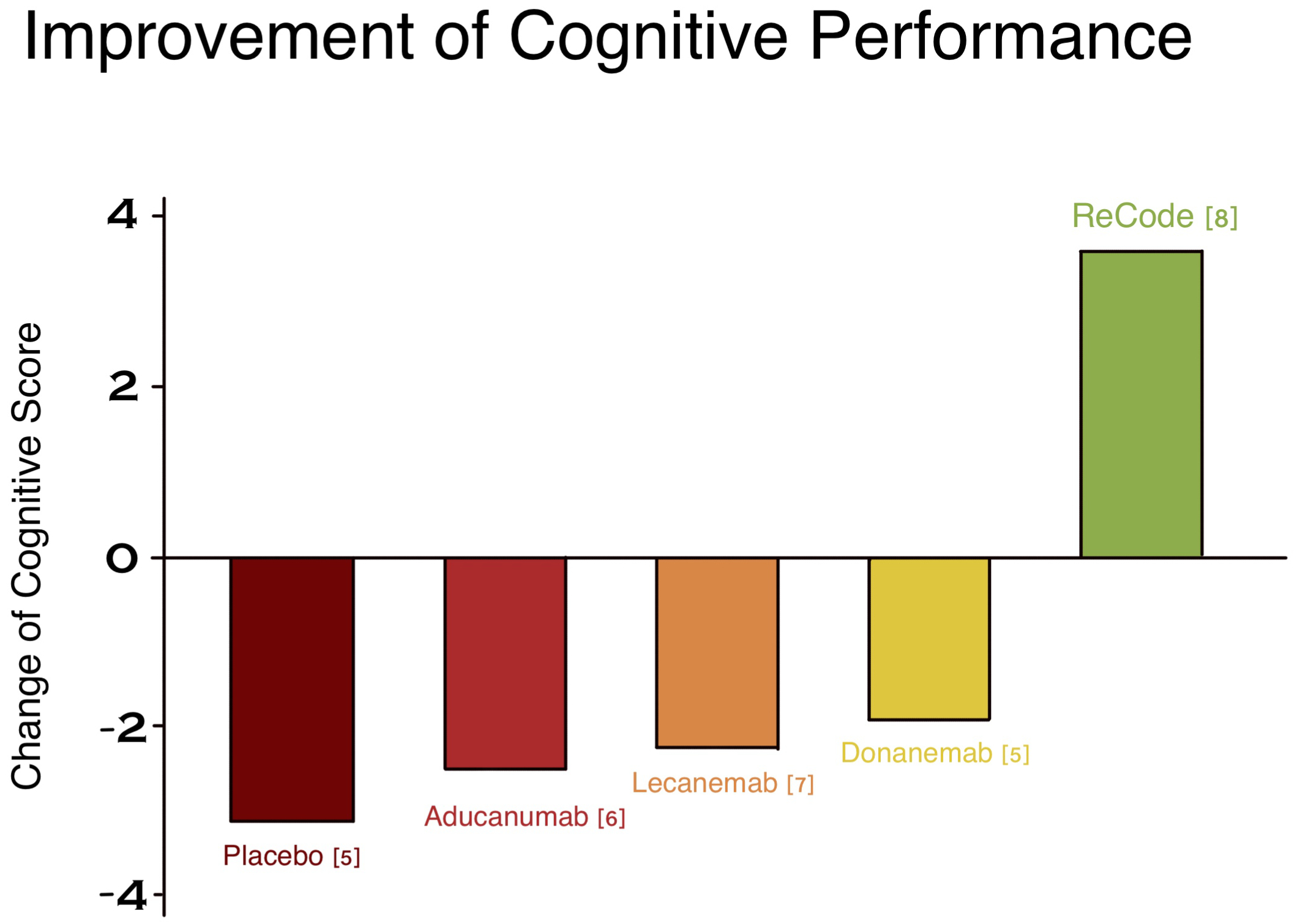 Figure: Effectiveness of therapies with monoclonal antibodies in comparison to the multimodal treatment concept ReCode (modified after https://www.apollohealthco.com/alzheimers-reversal)

In recent years, a new form of anti-Alzheimer’s drugs has been developed: monoclonal antibodies (ending in “-mab”) that specifically target Alzheimer’s-specific amyloid deposits. Even though these plaques in the brains of Alzheimer’s patients have been reduced significantly in some cases after treatment with these new agents, the clinical efficacy of all the preparations tested so far remains extremely low and the benefit for patients questionable. On the other hand, the risk of fatal side effects such as brain swelling and cerebral hemorrhage, as well as the cost factor for the therapy, are enormously high. Thus, the new Alzheimer’s drugs are also not, as expected, the drug breakthrough that can stop this terrible disease.

All this seems almost ironic since effective, side-effect-free and significantly less costly lifestyle-oriented prevention and therapy concepts are available. Fortunately, with this knowledge, you have the choice to decide on the right therapy for your mental health!