It’s been a long road for Dr. Dale Bredesen in Alzheimer’s research: He worked for years as a scientist and studied dying brain cells, fruit flies with “Alzflymer” and transgenic mice with “Mouzheimer’s.” But his applications for clinical trials that could demonstrate proof of efficacy of his research concepts in patients were first rejected in 2011 and again in 2018. Instead, he published treatment successes in his patients in 2014, 2016 and 2018. Finally, in 2019, he received approval to conduct a clinical trial, which was then completed last year.

Now, the results are finally in for this ‘special’ study, which uses a fundamentally different approach and flips the clinical trial script: instead of prescribing a treatment, here the causes of Alzheimer’s and pre-Alzheimer’s that contribute to cognitive decline were first identified in each patient, and these were treated individually and thus targeted. So, in this study, deeper dives are made into the genetics and biochemistry of each patient to generate the optimal protocol for each. In this precision medicine study, Dr. Bredesen collaborated with three integrative medicine physicians, Kat Toups, Ann Hathaway and Deborah Gordon. 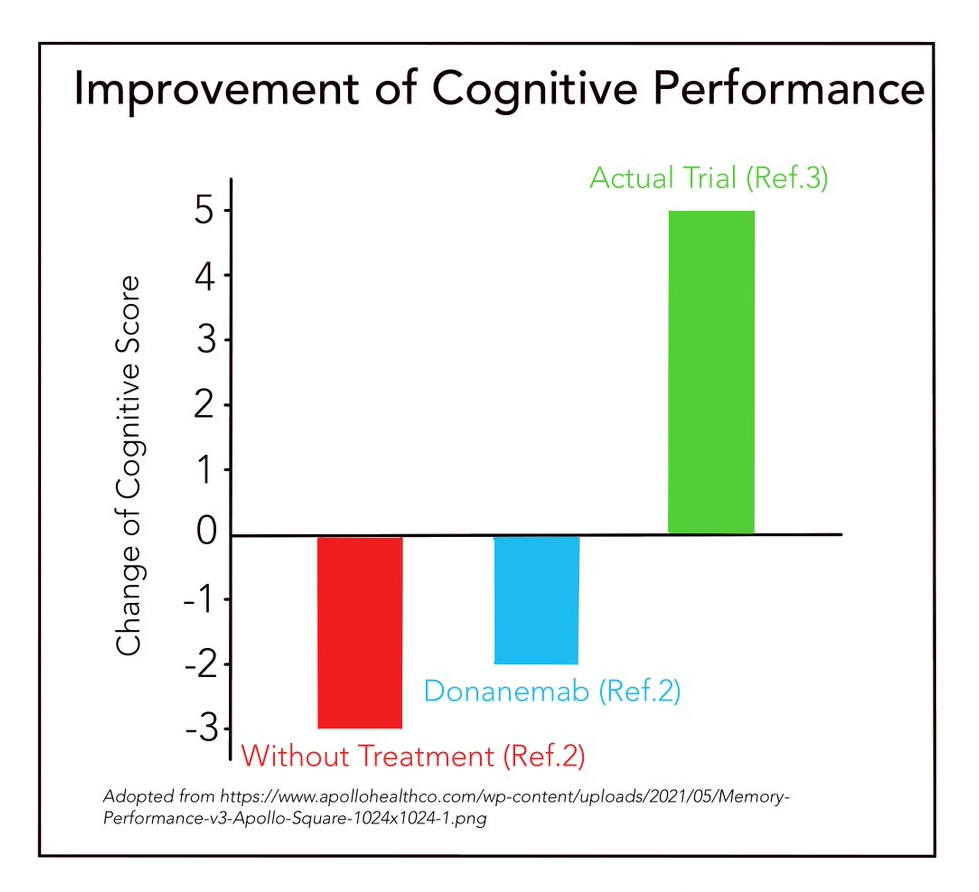 have not produced sustained improvements. For example, the current ’positive’ trial for the drug candidate donanemab, a monoclonal antibody against beta-amyloid proteins, showed neither cognitive improvement nor stabilization of dementia, but only a reduction in the rate of progression by about one-third (see Figure).

Thus, this would be a major failure of medical treatments for neurodegenerative diseases such as Alzheimer’s: in the U.S., it is currently estimated that about 45 million people will die from Alzheimer’s disease if effective treatment and prevention will be not developed. Against this backdrop, the results of this new clinical trial by Dr. Bredesen, published as a preprint in medRxiv, a Yale-supported health sciences website, appear almost unprecedented (see figure).

The study design: Dr. Bredesen’s study included 25 participants aged 50 to 76 years, all of whom were diagnosed with mild cognitive impairment (pre-Alzheimer’s) or early-stage dementia. Each patient was tested for existing risk factors such as inflammation, insulin resistance, nutrient and hormone deficiencies, specific pathogens, exposure to (bio)toxins, and genetics, and then treated with a personalized protocol that continued for nine months. Treatment of the putative causes of cognitive decline with similar functional medical approaches have already resulted in “case study” publications, but in contrast to these, this is the first prospective clinical trial.

The results: Among the study participants, 21 (84%) improved significantly, one showed no change (4%), and three deteriorated (12%). Improvement was monitored using various cognitive testing procedures. Furthermore, imaging techniques such as MRI of the brain complemented the results of this cognitive test battery. They showed that brain shrinkage, which typically occurs in dementia, was prevented and thus paralleled the improvement in cognition.

These extremely promising results demonstrate that identifying the factors that contribute to cognitive decline in each patient and treating them with a personalized protocol is an effective therapeutic approach for patients with pre-Alzheimer’s disease or early dementia. This small study continues to warrant a larger, randomized, controlled follow-up study, which is already underway. We will keep you updated on its progress to ensure that you continue to be well informed and on the cutting edge of clinical Alzheimer’s research!

After the failure of all drug monotherapies in clinical trials, this prospective clinical trial of Dr. Bredesen’s multifactorial approach shows compelling results for the first time: 84% of patients experienced improvements in symptomatology, improved scores on cognitive tests, and increased gray matter volume on MRI. The results offer real hope for millions of patients with dementia or mild cognitive impairment, as well as those at risk for dementia due to a family history.

Awakening from deep dementia: favourite music as the key to memory
Next

Galactose as a therapeutic sugar alternative for Alzheimer's dementia?