Monounsaturated fatty acids can be considered neutral in relation to inflammatory and degenerative diseases, with olive oil (main component: oleic acid 55-83%) being of particular importance due to its polyphenol content. The many health and life-prolonging benefits of olive oil are due to its high content of oleuropein, a polyphenol that helps lower LDL and blood pressure, prevents cognitive problems and cancer, and protects against oxidative damage [Omar 2010].. 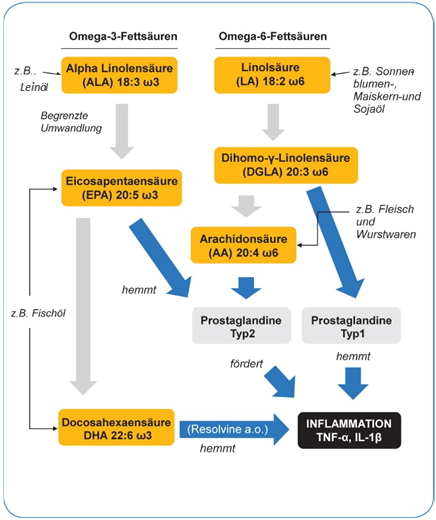 Nowadays the average omega-6/3 ratio in the population is about 15:1, while

can be considered neutral and health-promoting.

are dietary fats that are incorporated into cell membranes and play a role in anti-inflammatory processes and in the viscosity of cell membranes. ALA can only be obtained from food, while DHA and EPA can be synthesized from ALA in the body, but only to a limited extent. Therefore, it is crucial to ingest DHA and EPA additionally through food or supplements (if you do not eat fish). DHA is the most abundant lipid in the neuronal cell membrane, and EPA is involved in synaptic plasticity and increases the number and function of synapses. DHA and EPA are found mainly in foods such as fish oils and fatty fish, including salmon, tuna and trout, while ALA is commonly found in vegetable oils such as soy, rapeseed and linseed oils, nuts and in smaller amounts in seeds, vegetables, legumes, cereals and fruits.

Studies have shown that fish consumption is associated with a lower risk of AD development. In addition, an increased intake of omega-3 fatty acids appears to have positive long-term effects on the structure and volume of certain neuron-rich regions of the brain. The results of observational studies suggest that a sufficient intake of fatty fish and the omega-3 fatty acids they contain (especially DHA) may help prevent the development of pathological, progressive tissue loss from the cerebral cortex and reduce the risk of Alzheimer’s disease. An interesting study showed that the combination of omega-3 and alpha lipoic acid slowed cognitive and functional degeneration in AD over 12 months. Alpha lipoic acid is a powerful antioxidant and can recycle other antioxidants such as vitamin C, vitamin E and glutathione.

Another study showed a correlation between DHA and B vitamins: When DHA levels were high, supplementation of B vitamins showed greater effects.

These results suggest that the right combination of micronutrients is also important and not one substance alone, as the different micronutrients interact with each other and therefore a certain balance between them is important. A good balance provides all the substances that neurons need to function properly and live longer.

The following rules must therefore apply to the prevention of Alzheimer’s disease and dementia:

An approved and recommended agent here are pollutant-tested fish oils and even better algae oils with high concentrations of EHA and DPA. At least 2 g EPA/DHA should be added per day for prevention.