Skip to content
Startseite » Turmeric: A potential shield against dementia

Turmeric: A potential shield against dementia

Curcumin is a yellow pigment contained in turmeric (Curcuma longa). The benefits of curcumin in different organ systems have been extensively documented in the past in several neurological diseases and cancer. Curcumin has received worldwide recognition for its potent antioxidant, anti-inflammatory, anti-cancer and antimicrobial activities. Curcumin has been successfully used to treat diabetes and arthritis, as well as liver, kidney and cardiovascular diseases. Recently, attention has focused on the use of curcumin to prevent or delay the onset of neurodegenerative diseases. A recently published review study (https://www.ncbi.nlm.nih.gov/pubmed/31185140) summarized the use of curcumin in different neurological diseases, including Alzheimer’s disease. Recent advances in curcumin formulations and strategies to overcome low bioavailability are discussed as well as toxicity and ongoing clinical trials. 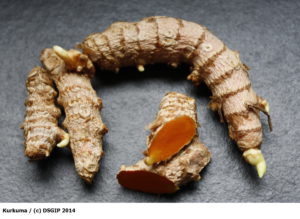 There is good evidence that turmeric consumption has various potential health benefits not only for older people. In addition to its role in treatment and prevention, curcumin acts in AD therapies as an antioxidant, anti-inflammatory, inhibitor of Aβ aggregation and chelator of metal ions. These effects are, regardless of the results of clinical studies, a good reason to include curcuminoids in our regular diet – e.g. in the form of strong curries.

What is the cause of Alzheimer's disease? The most feared plaques certainly not!